In our article on homeopathic dilutions, we explained how the serial dilution of a homeopathic starting remedy is done in order to eliminate the toxicity from it. However, as both science and common sense would predict, diluting the remedy to eliminate its toxicity would dilute out any therapeutic effects also. As homeopaths usually dilute their remedies to the point where there's not even a single molecule of the starting ingredients left, they can rightly claim that their remedies are perfectly safe and free from side effects. 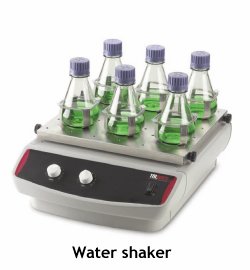 Of course, if a remedy contains no ingredients, it is perfectly safe and side-effect free because it doesn't have any effects whatsoever. So why, if they are producing ingredient-free remedies, do homeopaths insist that their remedies work? It's because they believe in a process called potentisation.

In between the serial dilutions in a remedy's preparation, the intermediate remedy is 'succussed' (vigorously shaken or tapped against a solid object). This action is claimed to transfer the 'essence' (fundamental properties) of the ingredients to the water they're dissolved in. Homeopaths also believe that the more times this is done, the stronger the remedy becomes - each subsequent dilution and succussion increases the 'potency' of the remedy. So a remedy at 6C potency (which contains trace amounts of ingredients) is thought to be a weaker remedy than a 30C potency (which contains no ingredients at all).

It is important to understand the difference between dilution and potentisation when looking at the claims of homeopathy. Critics will often point out that homeopathy can't work because of the extreme dilutions used but it's not the level of dilution, or even the absence or presence of ingredients, that homeopaths claim to be the reason for their remedies to work - it's potentisation that's claimed as the reason. The idea of potentisation, however, is not without its problems.

Homeopaths often refer to the 'memory of water'. This is the standard explanation for how potentisation works: through the shaking and tapping of succussion, the essence of the remedy is imprinted onto the structure of water which 'remembers' it. The main problem being that water, despite a few false positives (experiments that had positive results but which failed replication), has never been shown to have a memory. Reference is also often made to quantum mechanics or to digital recordings as proposed explanations or analogies for potentisation/water memory. Potentisation and its proposed mechanisms are explanations for effects that can't be shown to exist.

There are many procedures available to investigate the structure of matter such as: transmission electron microscopy, spectroscopy, ultraviolet transmission characteristics, X-rays and ultrasonographics. Although water does form structural clusters, it only does so for a matter of nanoseconds[1]. Science cannot tell the difference between water and potentised water - and neither can homeopaths[2]. There is also the added complication that most homeopathic remedies are sold in pill form. Even if water did have a memory, it is not clear how this memory of the substance once dissolved in it gets transferred to the sugar pill as the water evaporates from it.

Of course, there is another way of looking at potentisation.

In his book The Golden Bough, Sir James Frazer, an anthropologist studying religion and superstition in peoples of the world, classified aspects of magical thinking (superstitious thinking). He noticed that superstition falls into patterns and that these patterns are universal throughout humanity.

Sympathetic magic is the belief in non-physical cause and effect mediated by undetectable forces and properties. Frazer identified two main components to sympathetic magic:

The main problems with homeopaths' claims are:

Although critics of homeopathy tend to focus on the extreme dilutions homeopaths use, and this is correct from a scientific perspective, homeopaths themselves don't deny that their remedies often contain no ingredients. This is because they claim that their remedies work because of potentisation through succussion. However, the idea of potentisation has no basis in scientific understanding nor does it have an evidence base to support it. Homeopaths may claim that potentisation does something, even if they can't explain how or why, based on the results they see; however, those results may be as a result of how placebo effects can give the illusion of ineffective treatments working[3].

Potentisation, therefore, could be a name given to a process whose explanation is still awaiting discovery or it may be another form of superstitious/magical thinking. As there are no effects detected in well-conducted clinical trials of homeopathic remedies, the second option looks the far more likely of the two to be correct.

[3] How ineffective treatments appear to work